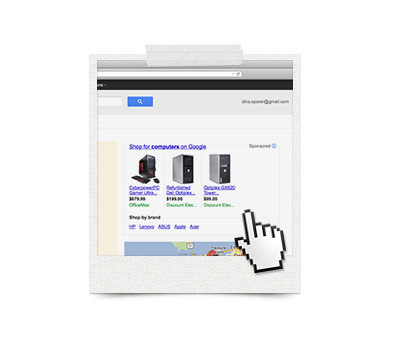 A Picture is Worth a Thousand…Clicks

Admittedly, we’re excited about Google PLAs and our recent findings. Yes, PLAs are still relatively new – at least the sponsored-only version – but it’s always intriguing to watch a new ad type take off and we’ve got some of the best seats in the house.

While the rise of PLAs may give cause for some to extrapolate what they mean for Google, its competitors, and advertisers, I thought it would be fun to examine what the success of PLAs could mean for consumers.

We often hear and perhaps even complain ourselves about those “annoying ads.” But what if ads weren’t annoying? What if they truly added to your online experience? Everyone would be happy, with users and advertisers having reached digital marketing nirvana – right? It certainly sounds far-fetched; however, I like to think the success of PLAs hints at progress.

As our data shows, consumers like PLAs. You could even argue they prefer the ad type (certainly more than text ads); something about a relevant image just draws people in. A picture is worth a thousand words or in this case a thousand clicks, but the relevancy is the critical part. An online shopper is looking for a product and up pops an image of what they’re looking for. Problem solved. Thank you, advertisement. Wrong image, though, and it becomes annoying.

The scenario works well in an intent-to-buy situation, but most of us use the Internet for things other than just shopping. Hard to serve a relevant ad if I don’t know what you’re up to. Still, ads can be relevant if advertisers have some inkling of intent.

With search, keywords leave advertisers some trail of bread crumbs to follow. Outside of search, the crumbs become scarce. Even on Facebook where there’s plenty of profile information, the nature or intent of a user’s interaction remains a mystery.

Encroaching on users’ privacy isn’t the answer. So, advertisers are left with honing their audience targeting skills. Ad tech will obviously play a role.

In the meantime, rather than resist the presence of ads, Internet users can look at their penchant for PLAs to see what happens when advertisers get it right.

Product Listing Ads
Subscribe
Sign Up and Get Updates by Email
Thank you! Your submission has been received!
Oops! Something went wrong while submitting the form.