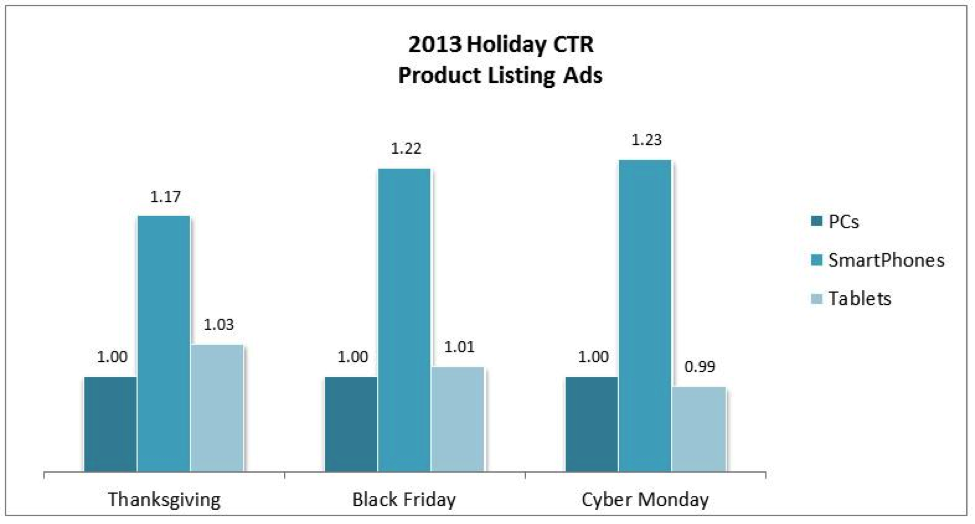 Black Friday and Cyber Monday are quickly looming and retail stores are already beginning to advertise and promote their deals for these annual events. This is also the first year that Shopping campaigns are available for advertisers, although we have an idea of what to expect based off Product Listing Ads (PLAs) last year. We decided to take a look back to how PLAs performed during this time in 2013 to help predict how Shopping campaigns may behave this year.

During the entirety of last year, PLAs saw rapid adoption and proved to be a crucial part of many retailers’ ad strategy. During Thanksgiving, Black Friday, and Cyber Monday, PLA CTRs were 36%, 49%, and 61% higher than text ads, respectively. In addition, PLA CPCs were also lower by 7%, 9%, and 6%. Although PLA CPCs rose to almost meet text ad CPCs, the difference between PLA and text ad CTRs rose dramatically.

With all this in mind, it is without question that Shopping campaigns will be an important part of this holiday season. With Shopping behavior largely mirroring PLA behavior, it makes sense that we’ll see similar trends in a couple weeks once the 2014 Thanksgiving season is over.

Product Listing Ads
Subscribe
Sign Up and Get Updates by Email
Thank you! Your submission has been received!
Oops! Something went wrong while submitting the form.
Featured Posts