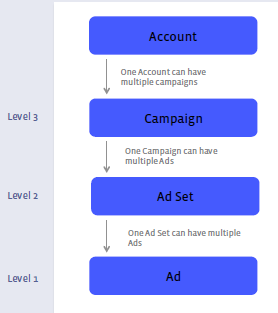 Just when the dust settled from Google’s Enhanced Campaign migrations, the online marketing industry has once again been shaken with a major change, this time from Facebook.

On Thursday, Facebook announced that they will be overhauling the campaign structure for their entire advertising program with a target launch date of February 14, 2014. Facebook will be adding an additional layer to their existing campaign/ad structure with the aim of making it easier to organize campaigns, control budgets, and measure performance.

The new campaign taxonomy will have an additional level - the "ad set" - between campaigns and ads. As part of the initial rollout, the ad set will replace the current campaign level and an additional level will be created between the account and ad set. There will be no changes to ads (the most granular Facebook campaign object) as part of the initial roll out. Effectively, the new structure will look like this:

According to Facebook, the changes are meant to provide advertisers with a better way to organize their campaign efforts toward a single objective. Today, advertisers can have hundreds of campaigns in a single account, all focused on different objectives. For example, an advertiser may have 15% of their campaigns focused on acquiring more fans, 20% focused on driving mobile or desktop app engagement, and 65% focused on website acquisition toward an ROI objective. Managing thousands of campaigns across hundreds of targeted audiences with mixed objectives can be confusing and problematic for advertisers without a sophisticated management platform.

With the new campaign hierarchy, Facebook aims to provide advertisers with a way to group campaigns around a single objective, which will reside in their new "campaign" tier. Facebook is likely betting that their new campaign structure will result in improvements in management and reporting.

Another possible motive for the change is the fact that the Facebook algorithm currently does not allow advertisers to easily test multiple audiences within a single campaign. For example, if you want to know whether your advertising drives better results from male or female target audiences, you would need to set up separate campaigns each targeting a different gender. Ideally, an advertiser should be able to test performance against two audiences within the same campaign (similar to A/B testing creatives in a single ad group in Google or Bing). However, because the Facebook algorithm leverages historical audience data at the campaign level, advertisers cannot execute a fair A/B test. With the creation of ad sets, I believe Facebook is attempting to address the A/B ad testing challenges inherent to its algorithm and will encourage advertisers to use the ad sets as creative test groups.

Marin sees Facebook’s announcement as a positive and is excited for the upcoming changes. With more than three years as an API partner, our platform is in a position to quickly deliver an intuitive solution for managing these changes. When Marin first joined the Facebook API partner program in 2010, our ads tool was built with the same exact “three tier” campaign Facebook structure. Our familiarity and experience with the exact same model Facebook is proposing should create exciting opportunities for our customers and help them reach their business objectives faster than ever before.