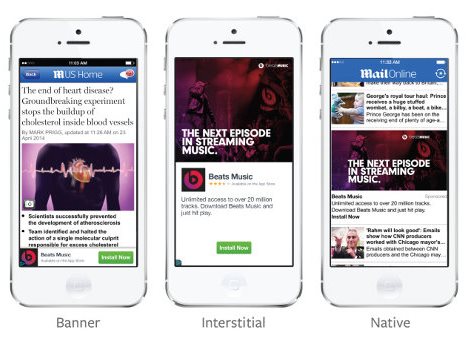 The initial version of the Facebook Audience Network will be limited to mobile app install ads, although Facebook has indicated that they intend to support a variety of marketing objectives including in-store and online sales. Advertisers will be able to serve app install ads, traditional mobile banners, and interstitial creative formats in Facebook’s new network. They will also be able to target Facebook users via Custom Audiences, Core Audiences, and Look-Alike Audiences. Participating beta advertisers can enable targeting on the Facebook Audience Network at the Ad level, along with existing device placement options. Therefore, advertisers will be able to report and analyze the performance of ads placed on the Audience Network performance separately from ads placed on the Facebook platform.

Contrary to popular speculation, the Facebook login ID will not be the key connector to retarget users between mobile apps on the network. In other words, mobile app users are not required to be logged into apps using Facebook in order to received targeted ads through the network. Rather, Facebook will compare device IDs and data points with other app developers to find common users, which will identify which apps are installed on a user’s device.

With the launch of this new mobile ad network, Facebook stands to compete with Google AdMob and other established networks capitalizing on the rapid growth of mobile app usage. Facebook has been moving in this direction over the past year, with a laser-focus on growing its mobile advertising business – and for good reason.

First, Facebook’s mobile user base has evolved into the most active and engaged of any major digital platform in the world. More time is spent on Facebook than any other mobile platform or website and, according to their latest earnings report, their mobile market share growth is 2.4 times greater than Google’s.

Second, Facebook has realized a notable uptick in users who access the platform only on mobile devices. In fact, 74% of the social network’s daily active users exhibit this behavior. Also, the growth rate of users who only access Facebook via mobile is six times higher than the overall growth rate. These statistics demonstrate why Facebook is so intent on improving the mobile experience for users and advertisers. They have clearly established one of the best mobile audiences of any channel or publisher.

Facebook Audience Network’s creation suggests the company is now seeking an even bigger piece of the overall mobile app advertising market. According to eMarketer, the number of mobile apps has increased 43% year-over-year to over 2 million while the number of mobile app downloads grew by only 30%. This gap indicates that marketers need better ways to help mobile users discover apps.

Recognizing this opportunity, Facebook released mobile app ads more than a year ago, designed to drive users toward installing and engaging with mobile apps. These have been a hit with advertisers, and have by measure of spend have surpassed Google’s app install ad product (mobile app install extensions) as the leading mobile app advertising product. Facebook Audience Network is poised to take a prominent position in the mobile app advertising market, which has grown to an estimated 30% of mobile advertising as reported by eMarketer.

When considering Facebook’s sophisticated, unique audience targeting capabilities, advertisers have a lot be excited about with the launch of the new ad network. Most mobile ad networks (Google AdMob and Millennial Media, for example) target mobile app users based on where they have been and what they have previously downloaded. For instance, a mobile app on the AdMob network may serve a dietary supplement ad to somebody who previously downloaded a fitness app.

While there is nothing inherently wrong with this approach, Facebook’s mobile ad network is primed to take mobile targeting to another level. On the Facebook mobile ad network, advertisers will not only be able to target users by what they’ve done (via Custom Audiences and Partner Categories) but also by who they are (Core Audiences). This approach to audience targeting is highly differentiated from other ad networks, and should intrigue advertisers to experiment with ad network buys when the product becomes generally available.