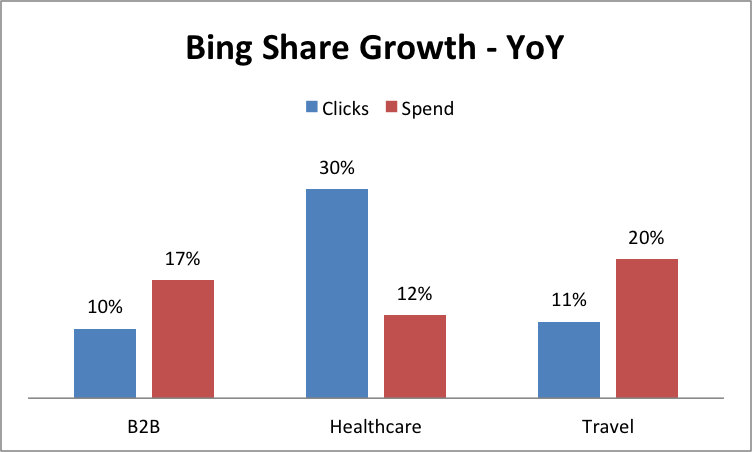 While Google has long been (and still remains) the dominant search engine in the US market, there are signs that Bing is becoming more of a contender - at least in a few key verticals. Due to our curious nature, we decided to examine Google vs Bing US data over the last five quarters to see how much headway Bing has made in capturing click and spend share.

From our data gathering, we were able to see three verticals that have seen significant gains in click share since Q2 2013: B2B services, healthcare, and travel. While other verticals have seen minor fluctuations, we saw click share grow by at least 10% for these three verticals, compared to an average of 4%. In addition, we saw at least 12% spend share growth for these three industries, versus an overall spend share growth of 4% year over year.

Why is this happening?

It could be for a variety of reasons. One, Bing’s users have always skewed older than Google’s, favoring 35 and up, and especially 55-64 year olds. From this, we can infer that these users would show more interest in these three verticals than Google’s. As the economy picks up, it also makes sense that Bing’s user-base would be searching and clicking more often on ads within these verticals than on Google. People searching for B2B services would exclude a large audience of students and junior employees, who are more likely Google users. With the Affordable Care Act in play, we can surmise that the large jump in healthcare clicks is, again, an older user-base searching for information and signing up in the middle of this period, causing a sharp increase in Bing healthcare click-share. Similarly, travel may be more affordable to those with disposable income further in their careers, or heads of households, who are more likely to use Bing. In addition, these three verticals cover topics that require extensive research before a purchase decision is made, which may show that online searchers are going across multiple search platforms to do thorough research before any decisions.

What do YOU think? Feel free to leave a comment below to continue the Google vs Bing conversation.

Publishers
Subscribe
Sign Up and Get Updates by Email
Thank you! Your submission has been received!
Oops! Something went wrong while submitting the form.
Featured Posts