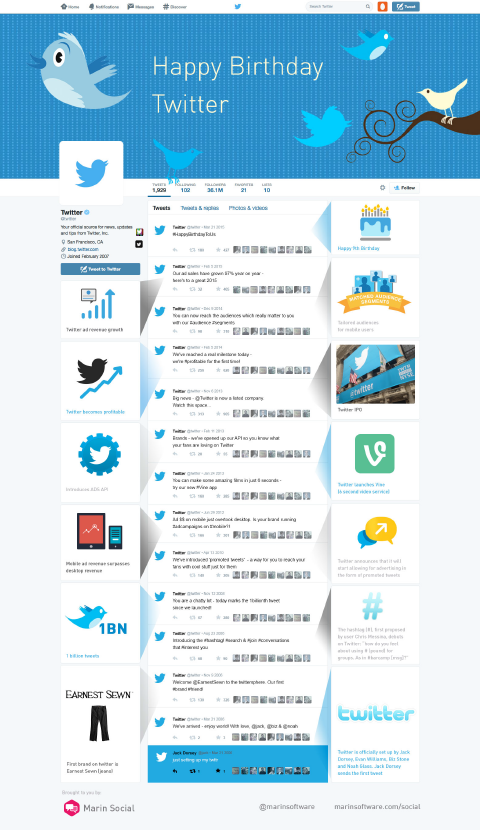 Social publishers grow up so fast...
Check out this infographic of Twitter milestones.

Ever since its inception, through to its IPO in November 2013, the challenge for Twitter has been to balance the need to monetize its platform with ads without alienating its loyal user base. So how is it doing?

Overall Twitter ad revenue increased 97% (Feb ’14-Feb ’15). This is because Twitter has become a highly attractive advertising medium for savvy advertisers. Twitter has worked hard to attract marketers by broadening its advertising options, opening up more audience data and launching new capabilities to reach users, such as pinned tweets and Vines. In the US it’s even testing a ‘buy’ button. These moves have been important for brands, who might otherwise fear their message could be drowned out by the sheer volume of noise on the platform - over 9,000 tweets are posted every second.

Twitter has also been quick to embrace mobile, something Facebook admits it took longer to do. Smartphone adoption is a key reason Twitter will continue to grow in the years ahead; mobile already accounts for 85% of Twitter usage and 85% of all its ad revenue.

All of this appears to have been achieved without upsetting existing users - it’s hard find any evidence that ads are creating Twitter quitters. Growth of new users has slowed, but Twitter is still on course to hit 400m users this month, that is an astoundingly large audience.

The bottom line is that Twitter will continue to attract advertisers if the advertising continues to work and if users are kept happy; keeping this balance in check will be critical. The signs are positive, Twitter is a here to stay for at least another 9 years and will continue to grow as an important channel for digital marketers.

Advertisers can use the Marin Social platform to manage Twitter ads alongside Facebook. Request a demo today.