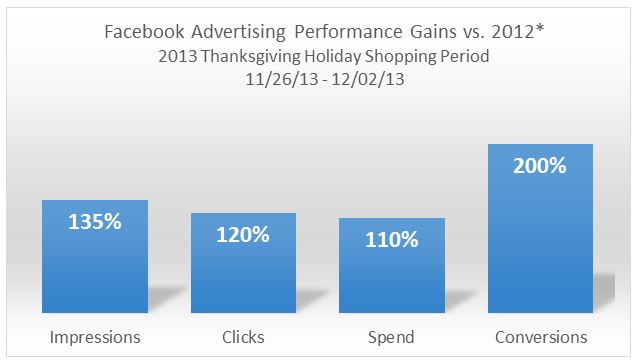 Between November 26 and December 2 2013, Marin clients increased their spend markedly when compared to this timeframe in 2012. According to Marin Software data, one large retailer (with over $10 Billion in annual revenue) spent 110% more than they did in 2012, driving 120% more clicks. This data suggests retailers were more than willing to increase their holiday advertising budgets on Facebook and take advantage of the user acquisition-focused creative, placement and targeting options introduced in 2013.

This large retailer also received 135% more Facebook ad impressions during the 2013 Thanksgiving holiday season compared to 2012. The significant increase in YoY impressions is likely explained by Facebook’s rapidly growing user base (+21% user base**), which has expanded advertiser reach. Retailers may have also been willing to bid more aggressively on high value target audiences this Thanksgiving.

Over the past year, millions of advertisers have rushed to take advantage of the platform’s simplified approach to performance marketing. This data suggests that Facebook’s “simplified” approach may be working for retailers, especially during peak seasonal periods of high demand. The YoY improvements in cost per conversion suggest marketers are becoming more sophisticated with campaign implementation and creative optimization, in most cases with the help of online marketing platforms.

*The data for this analysis reflects a single enterprise retail advertiser with over $10 Billion in annual revenue and more than 700 store locations across the US. As such, our findings skew towards the performance of larger retailers. However, the size and broad geographic coverage of this retailer enables us to provide an analysis of Facebook ads performance across the retail sector from 11/26/13 through 12/02/13. All data is accurate as of 12/2/13, but subject to change; and represents a year over year analysis of the same holiday time period.