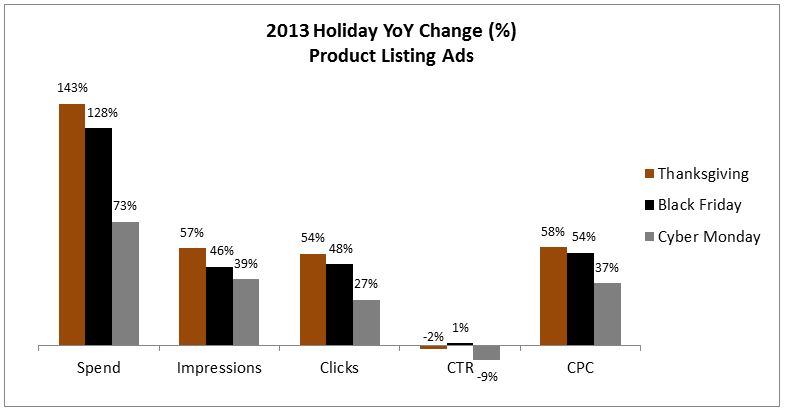 Leading up to the 2013 holiday season, Google introduced a number of changes to spruce up their Product Listing Ads (PLAs). Expanding the number of PLAs delivered on smartphones and adding new consumer features, like viewing similar items or creating “shortlists," are clear indicators that Google expects their rich and highly engaging feed-based ads to be the format of choice for retail advertisers and shoppers. Over the three biggest online shopping days of the holiday season - Thanksgiving, Black Friday, and Cyber Monday - we sampled the Marin Global Online Advertising Index, analyzing enterprise retailers spending over $100,000 per month on Google’s standard text ads and PLAs.

In August of this year, the rapid adoption of PLAs was clear, marked by five consecutive months of increasing click-through rate (CTR) spanning February through July. Consequently, to capitalize on this emerging revenue opportunity, retailers invested heavily in PLAs during the three biggest shopping days with PLA spend increasing a staggering 143% on Thanksgiving year over year. The increase in spend was a result of more consumers shopping and an increase in competition, as retailers became more aggressive across the auction landscape. Unfortunately, shoppers did not increase their engagement with PLAs year over year. A lack of promotional text and the inability for retailers to effectively differentiate through product feeds likely caused this unexpected lull in CTR.

For some time now, we’ve been reporting on the superior performance of PLAs to standard text ads. Many retailers agree that PLAs not only perform better from a CTR perspective, but also cost less per click. During Thanksgiving, Black Friday, and Cyber Monday, PLA CTRs were 36%, 39%, and 61% higher than standard text ads, respectively. Moreover, PLA cost-per-click (CPC) was 7%, 9%, and 6% lower than standard text ads, respectively. Though the CPC gap between the two ad formats appeared to close slightly due to seasonality, the CTR gap widened significantly as shoppers continue to find PLAs more relevant and engaging during the holiday season.

Undoubtedly, PLAs continue to drive better results for retail advertisers. This richer ad format not only outperforms and is less expensive than standard text ads, but it also drives better engagement on smartphone devices where CPCs remain much lower. With Bing preparing to make Product Ads generally available at the start 2014, this level of PLA performance should make any retail advertiser salivate. Those looking to capitalize on these shopping ad opportunities must prepare for the upcoming changes to Google Shopping and invest in technology that scales the deployment, management, and optimization of this highly successful ad format.

The Marin Global Online Advertising Index is comprised of data from hundreds of large-scale advertisers and agencies that collectively invest more than $5 Billion in annualized spend through the Marin platform. The data analyzed by Marin for this snapshot reflects a subset of Marin's direct and agency clients managing active advertising programs in the retail sector from 11/26/13 through 12/02/13. All data is accurate as of 12/2/2013, but subject to change; and represents a year over year analysis of the same holiday time period.

Product Listing Ads
Subscribe
Sign Up and Get Updates by Email
Thank you! Your submission has been received!
Oops! Something went wrong while submitting the form.
Featured Posts