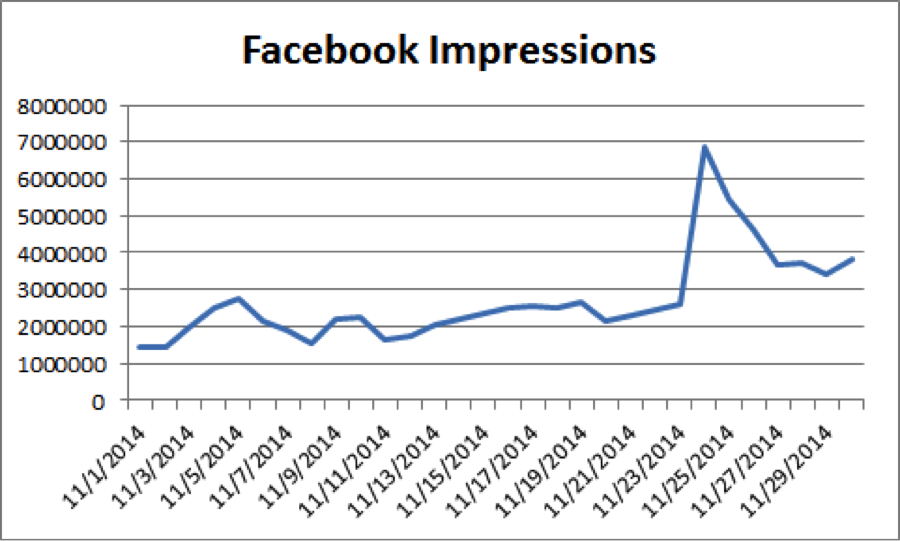 Peak Seasons and the Power of Timing

Determining the best time to hit audiences with ads – and on which channels – is always a challenge. This process becomes even more complicated during peak seasons, such as in November in advance of the Thanksgiving holiday rush.

Last November, we noticed that the best time for advertisers to reach customers on Facebook happened to be two weeks prior to Thanksgiving. To see if the same trend held true for November 2014, we took a look at impressions, clicks, and conversions on the channel.

This year we happened to see spikes in activity around Thanksgiving week, which contradicts our findings from last year where we saw the spike in user engagement in the few weeks prior to Thanksgiving. But why the change?

We anticipate this may be due to some of the modifications Facebook has made in the last year to their ad offerings. Taking a look at where the major spikes in engagement are seen in impressions, clicks, and conversions at the start of Thanksgiving week, customers were more apt to engage and convert right after the holiday, presumably for Black Friday and Cyber Monday.

If you take a look at mobile conversions on Google, we also see a spike on November 28th for Black Friday that is 250% above what we see for the rest of November.

Did this trend hold true for you as well? Share any developments you may have noticed in your own campaigns in the comments section below.