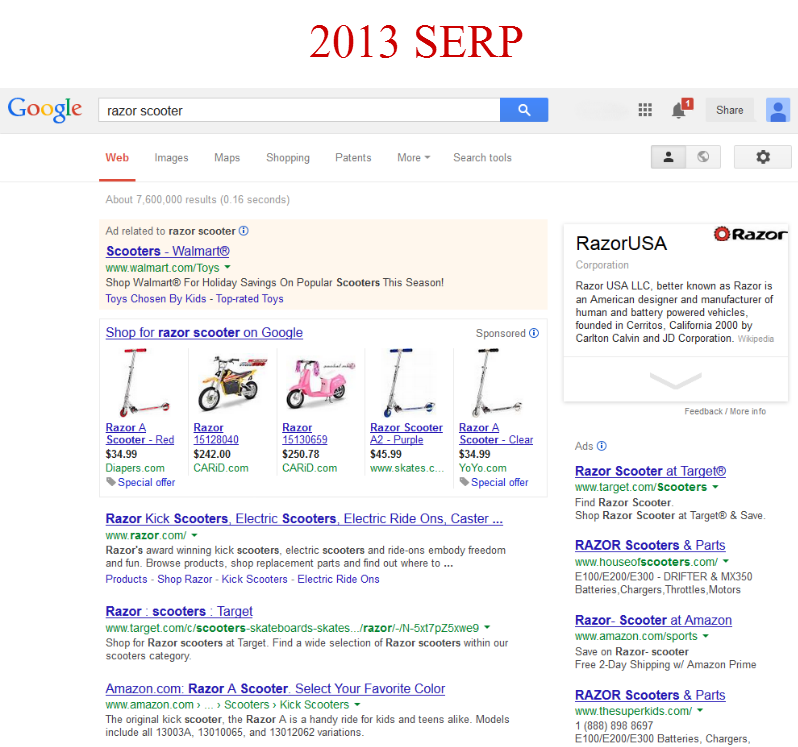 The SERP In Review

We all know Google is constantly toying with the SERP. Sorting out what new tweaks Google is testing can be difficult at times, but I thought it’d be fun to do a side-by-side comparison of what the SERP looked like a year ago compared to what it looks like now for the same search term, “Razor Scooter.” Here’s what I noticed:

1) More PLAs! Google was toying with adding more PLAs at the end of 2013 and it appears they’ve settled on more. In 2013, a total of four PLAs appeared. The SERP for 2014 delivered twice as many. The location has changed too.

2) More Text in Text Ads. The number of lines appearing with text ads has increased. Last year the largest text ad on the page consisted of four lines. This year, the largest (position 1) features up to seven lines. There isn’t an ad on the 2014 SERP with fewer than four lines. The addition of the review stars as well as the inclusion of physical addresses has created “longer” ads. This essentially means fewer text ads on the side are able to fit above the fold. In 2013, four text ads appeared on the side above the fold. In 2014, two and half appeared. The lost real-estate is compounded on smaller monitors – on a laptop just a single side bar text ad appeared.

3) The “Ad” Icon. Google started testing the “Ad” icon just over a year ago. It’s now the standard. Gone is the ad box with the title “Ad Related To [search query].” Instead, ads are identified by the little yellow “Ad” icon and ad organic search results are delineated by a grey bar or divider.

4) More Text Ads Above Organic Results. Last year, one text ad was served above the organic results. We now have three. With PLAs moving to the right side bar and the company description disappearing (this still appears on some, less retail focused results), room was freed up to serve two additional text ads. Organic results are pushed down. The same “Razor Scooter” search query today on a 13” laptop screen produces just a single organic result.

In short, the SERP is much more ad dominated, with the focus going towards PLAs and positions 1 – 3.

Google
Trends
Subscribe
Sign Up and Get Updates by Email
Thank you! Your submission has been received!
Oops! Something went wrong while submitting the form.