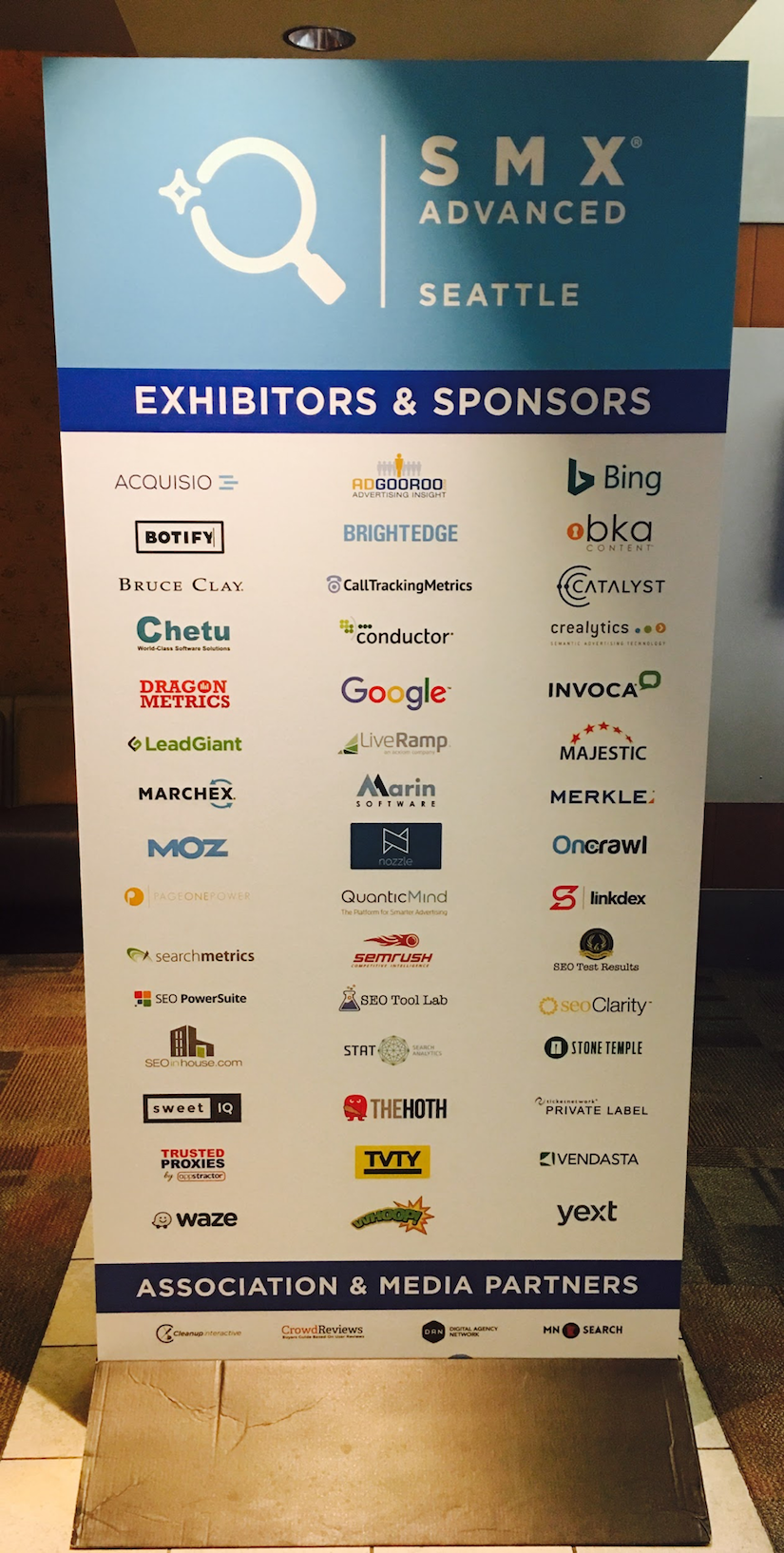 Over 1,300 people and 60 exhibitors traveled to Seattle from June 12-14 to attend SMX Advanced. This year’s event kicked off with a rooftop networking reception for SEO and SEM professionals. An overcast sky and arctic winds couldn’t dampen the crowd’s enthusiasm for topics like bidding strategies, attribution models, and audience targeting.

You can tell a lot about a conference by its premier sponsors—Google and Bing had a big presence at SMX, but the absence of social media sponsors was notable. While SMX is largely billed as a search marketing show, the lines between search and social are blurring across the industry. Multi-channel marketing is poised to emerge as a winning proposition, as industry leaders like Marin Software demonstrate the value of managing and optimizing both search and social advertising in tandem.

Tales of the expo hall

Like most expo halls, SMX had a mix of established companies like Moz in slick and spacious booths alongside scrappy startups like OnCrawl (visiting from Bordeaux). I did notice a cohort of vendors focusing on inbound call tracking, including Invoca, CallTrackingMetrics, LeadGiant, and Marchex. These click-to-call advertising solutions promised motivated prospects dialing into your business with clear purchase intent, which could make your white paper campaigns turn green with envy!

Google talks mobile at the keynote

Danny Sullivan led the SMX Advanced keynote, and interviewed Gary Illyes from Google. While somewhat light on product announcements, their discussion delved into topics like Google’s expanding mobile index, long awaited improvements to featured snippets, and the potential of combining Accelerated Mobile Pages (AMP) with Progressive Web Apps (PWA). Gary noted that the PWAs could overcome the install hurdle for native apps, which he described as “freakishly difficult” for most companies.

Bringing out the mad scientists

In one hypothetical test, Andreas used controlled experiments to prove that a more granular account structure actually improves campaign performance. His data showed that splitting products into separate product groups increases the total number of impressions received. This finding is at odds with Google’s recommendation not to split products too soon so that the algorithm has time to fine-tune performance.

In another experiment, Andreas showed that impressions and clicks are highly sensitive to price changes in Google Shopping campaigns. Using an Asics sneaker example, he demonstrated how a 5% increase in price can trigger a 60% decrease in clicks. His findings also demonstrated that products priced “cheaper than the competition” generate far more traffic than more expensive products. The art and science of pricing is alive and well, clearly!

If I learned one thing at SMX, it’s that the future of paid advertising is shifting towards combining search and social channels—and everyone at Marin is thrilled to be part of it. Let’s see how the industry evolves over the coming year, and I expect we’ll see new sponsors and an increasingly multi-channel agenda at SMX 2018.

Optimization
Retargeting
Trends
Subscribe
Sign Up and Get Updates by Email
Thank you! Your submission has been received!
Oops! Something went wrong while submitting the form.
Featured Posts