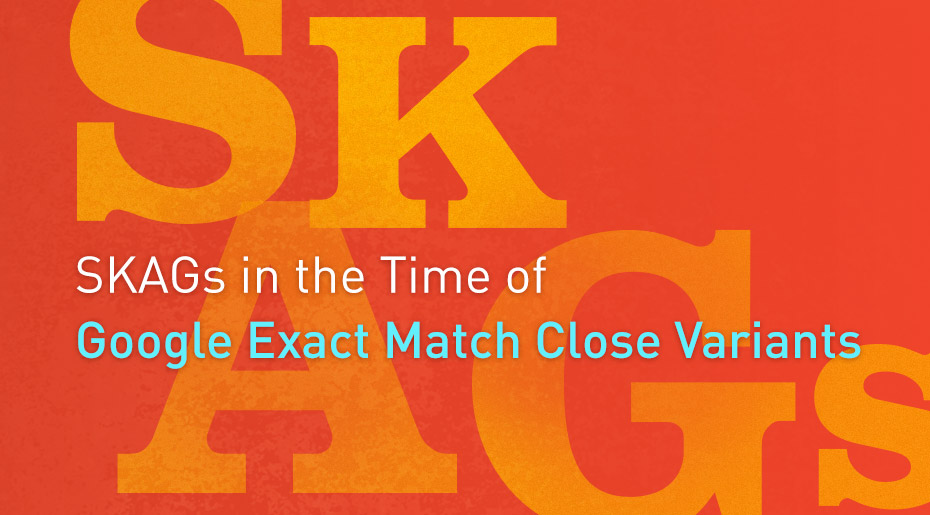 SKAGs in the Time of Google Exact Match Close Variants

Google argues that this update will assist advertisers in finding the right keywords to bid on, saving them from the trouble of building out exhaustive keyword lists. However, for advertisers who utilize single keyword ad groups (SKAGs), this update will fundamentally change how they build and maintain AdWords search campaigns.

This post examines how the close variant update will affect SKAGs and offers some best practices for adapting to the new exact match.

The update expands exact match close variants to include additional forms of rewordings, synonyms, and word reordering. Additionally, it ignores function words, such as “prepositions (in, to), conjunctions (for, but), articles (a, the) and other words that often don’t impact the intent behind a query.”

For example, if someone is searching for [wax for surfboard], it could trigger the exact match keywords [surf wax].

The Difference with SKAGs

As the name implies, SKAGs are ad groups with just one keyword in them. This campaign structure gives advertisers a granular level of control over which ads and landing pages are served to specific keywords.

For example, for the keyword [pet hotels], an advertiser can create ad copy that includes the keyword a couple of times. Because Google will bold any instance of the exact keyword in the ad text, keyword-specific ads will appear more relevant to a searcher, and are likely to drive higher click-through rates and lower CPCs. An advertiser can also drive to a custom landing page for that keyword, which should result in higher conversion rates.

With this new update, however, advertisers who utilize SKAGs will lose some level of control as more ‘close variant’ search queries will match to exact match keywords. This update should not degrade the benefits of a SKAGs campaign structure, but it will require advertisers to make a few adaptations.

Here are a few possible issues and adjustments to resolve them.

Note: Keep in mind that Google is staggering the rollout of the close variants update, so you won’t have to make changes immediately. At the time of this writing, Google has applied the update to 10% of all ad-eligible search traffic.

Let’s assume you’re bidding on the keywords [speakers for living room] and [living room speakers] in your SKAG campaign. The close variants update eliminates the differences between these keywords because it’ll ignore “for” and the fact that they’re ordered differently. Consequently, these two keywords would now be duplicates and competing in the same auctions—which can drive up CPCs.

So, it’s important to remove prepositions, conjunctions, and articles from your keywords and delete any duplicates. However, if function words/reordering significantly change the meaning of the keywords, you should consider keeping them if you want to ensure coverage. Work with your AdWords rep if you’re not sure whether the close variants update will affect specific keywords.

As previously mentioned, keyword-specific ad copy can perform better than generic counterparts. If any of your keywords became duplicates due to reordering or function words being ignored, you may want to consolidate ad copy between the two ad groups.

Reordering and ignoring function words could cause your keywords to serve for irrelevant terms. For example, [orange bag] isn’t the same as [bag of oranges]. We’re not sure if Google’s algorithms will know the difference between these keywords, so it doesn’t hurt to have your bases covered.

If any of your exact match keywords are at risk of serving to irrelevant search terms, you should preemptively add that search term as a negative keyword to prevent wasting budget. It’s also important to closely monitor search query reports and negate any irrelevant traffic early.

Overall, the close variants update will complicate how advertisers think about exact match. And, many are skeptical that the update will function as Google explained in its announcement, fearing that AdWords will start to match queries to keywords that don’t have the same meaning or intent. That said, search advertisers should take heart, since close variants is a positive change, as Marin explained in a previous post.

The English language is constantly evolving, and it’s also full of exceptions, nuances, and contradictions. Because of this, there will undoubtedly be a ‘machine learning’ curve as Google rolls out this update. For now, advertisers should keep a close eye on any new updates from Google regarding close variants, be prepared to adapt quickly once it applies to all search traffic, and get ready for the opportunities the change will open up.

Optimization
Google
SEO
Subscribe
Sign Up and Get Updates by Email
Thank you! Your submission has been received!
Oops! Something went wrong while submitting the form.