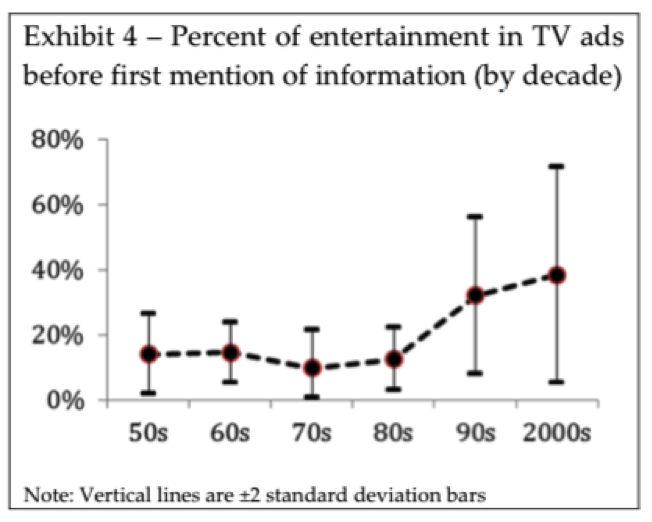 Am I the only one who missed the Budweiser Clydesdales? It’s clear that they weren’t the only thing absent from yesterday’s TV spots—many ads were also missing meaning. Why was that?

Super Bowl spots are usually quite entertaining (hat tip to Tide)—and notoriously expensive. So, they naturally invite industry commentary and speculation. But, this year’s event struck me as uniquely peculiar compared to previous years, and perhaps a harbinger of things to come. In today’s blog post we unpack what we observed and what it means for online advertising.

Our investigation begins with a qualitative analysis of the content in the ads themselves. Overall, there was a stark pivot towards ads that were equal parts engrossing and bizarre, with the product reveal typically a holdout until the very last shot.

This speaks to a larger reordering of the media landscape, with digital channels usurping TV in the competition for high-quality attention from both viewers and advertisers.

Compete for attention—entertain on one screen, inform on another

Website builder Wix (NASDAQ: WIX) made waves in January by opting out of its Super Bowl spot altogether. This was noteworthy because they moved that budget online.

Granted, NBC executives weren’t about to take this affront lying down, and reportedly came to Wix at the last minute with a "great offer" to buy a spot in the Super Bowl (that’s code for “massive discount”).

You might wonder how Wix was able to produce a commercial that fast. The answer: they recycled a previously recorded ad featuring two YouTube stars, Rhett and Link.

This turn of events inadvertently showcased how divergent today’s internet ads and TV ads have become. If you missed it, go ahead and watch Wix’s Internet ad that aired on TV and contrast that to one of the made-for-TV Super Bowl ads—such as one of Tide’s commercials.

See the difference? The made-for-internet ad is heavy on information and persuasion, while the TV ad is just ... funny(?).

Source: HBR, “When People Pay Attention to TV Ads, and Why”

Despite this role reversal, TV CPMs still dominate. If my math is right, Super Bowl eCPMs were about $220 this year.

In this context, Wix’s decision to yank its Super Bowl spot and invest it on the web makes more sense.

A quick look at Marin Software’s Global Advertising index reveals that video CPMs on channels like Facebook average $5-10, depending on industry and targeting.

That means Super Bowl ads cost up to 44 times more than video ads on Facebook--video ads that are being delivered in a high-attention context to a low-friction audience.

By low-friction, I mean: If my video ad suits your fancy, you can just click and buy. On the other hand, with Super Bowl ads, there isn’t a click to buy option. In fact, in today’s environment, one might argue Super Bowl ads are a lot like Tom Brady’s game-ending Hail Mary.

For TV’s sake, and the Clydesdales, we hope there’s a happier ending.

Analytics
Trends
Subscribe
Sign Up and Get Updates by Email
Thank you! Your submission has been received!
Oops! Something went wrong while submitting the form.
Featured Posts