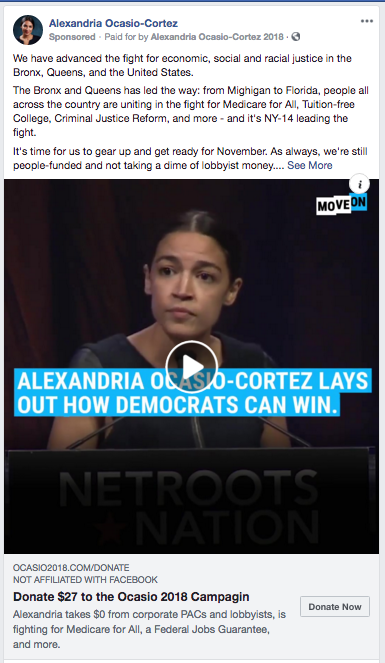 Advertisers are in the thick of it. They can shape public opinion, but most people don’t understand how—the psychology, emotions, and branding that contribute to trying to sway public opinion. To this end, the political space sees a lot of money and content that goes into advertising. What are things looking like just a couple of weeks before the big day?

The answer to this one is pretty simple: everyone— Republicans, Democrats, and Progressives alike. However, advertising trends between parties are pretty different and some even surprising!

This year, pro-Democratic candidates and PACs have outspent Republicans by a cool $30 million on TV ads. They’re spending $260 million in total, and according to eMarketer, competition’s only going to get more heated.

Whether Democrats outspending the GOP gives you hope for the future or leaves a bad taste in your mouth, Democratic Senate candidates are making a mistake spending the bulk (60-70%) of their marketing budgets on TV and direct mail. Where they need to be is digital. Democrats typically spend 10-15% of their marketing budget on digital, while our friends in the GOP spend a whopping 30% to 50%.

In the final weeks of this election cycle, however, House Democrats are finally getting with the times. Younger, more progressive faces of the party like Alexandria Ocasio-Cortez are making a big midterm push in digital ads. After all, robust digital strategies were integral to helping candidates like her and Ayanna Pressley win the primaries. Priorities USA and Senate Majority PAC—two prominent Democratic organizations—are dropping an additional $21 million in battleground states ahead of November 6th, exclusively in digital channels.

Example on the left: Alexandria Ocasio-Cortez[/caption]

Since people today spend an average of six hours a day looking at the internet and traditional TV as we know it is fading into the past, Senate Democrats would do well to heed the data and move more spend online. Also, TV and radio represent some of the most loosely targeted advertising options available. Which leads to the next question….

Where should politicians be advertising?

Digital. Republicans clearly know this. Since May of this year the Trump campaign has spent nearly a quarter million on Google platforms alone.

The main reason that digital content/channels are so important and so compelling for political organizations really comes down to targeting. Being able to deliver an emotional message doesn’t hurt, either. (To view some examples, Google now houses all political ads in its political ad library, which shows the breadth and depth of messaging in the current landscape.)

Example on the right: Bryan Steil[/caption]

Digital channels all offer the ability to target by demographic, language, interests, and probably most importantly, location. Hyper local targeting—sometimes down to the coordinate level—layered in with demographic and language targeting gives political advertisers the ability to tailor their ads to every single one of their constituents, with virtually no impression waste if done correctly.

On Facebook you can target people based on their level of college education, gender, ethnicity, generation, and the charities they donate to—all super-important indicators of who and what they might vote for.

With Google and YouTube, you can use topic and affinity targeting to literally pick which social and advocacy issues people are interested in. HIllary Clinton could target her ads toward people who care about reproductive rights, while Trump could target his ads at people with specific stances on immigration policy and border issues.

Meanwhile, Connected TV (CTV) is offering all the visual content of a traditional TV spot, but paired with the detailed targeting available in modern digital channels. I don’t think it’s worth Trump’s money to pay for CTV spot during an episode of The Handmaid's Tale, for example.

What should you watch out for?

To loosely quote Peter Parker’s uncle: with great (digital) power, comes great responsibility. This responsibility isn’t always respected. Political and 3rd party organizations have been getting around some of the rules by allowing bots, foreign powers, or other malfeasance to pump massive amounts of money into incendiary or even false political advertisements. It then becomes the responsibility of the marketing platforms to make sure the public isn’t being misled.

In May, Facebook announced a new slew of regulations for political ads including a mandatory “Paid for by” label, and stricter requirements for advertisers to verify identity and location. These regulations extend not just to electoral ads, but also to any ad containing content related to a highly debated political issue. Facebook is also hard at work in its newly revealed war room, aiming to eliminate election manipulation on its platform.

While these publishers are definitely taking the correct steps, it’s not a problem they can solve overnight. So whether you’re an advertiser yourself or just a fervent user of the internet, remember to try and go deeper than political ads in taking sides this November.

Now get out there and vote!