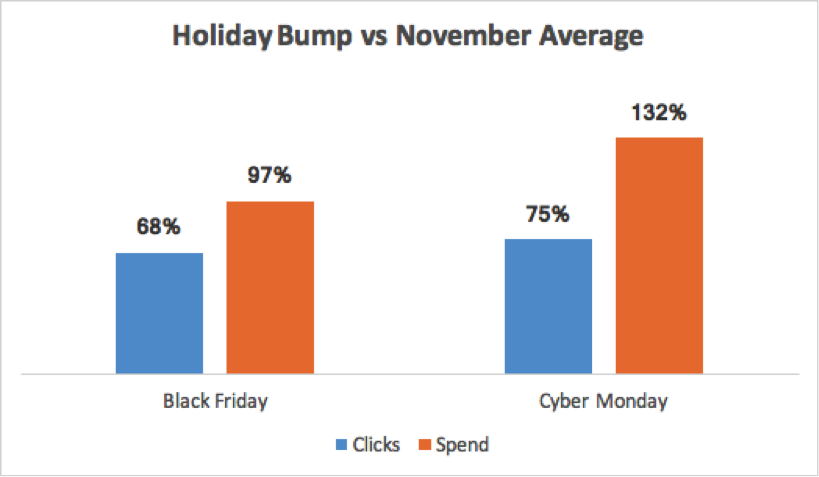 Each year we review the aggregate performance of our advertisers on Black Friday and Cyber Monday to see what kind of patterns and trends jump out at us. The story this year looks to be similar to the last two years—significant jumps in clicks and spend on paid search as the holiday shopping season officially gets kicked off.

The interesting thing we observed is that the increase in spend is significantly higher than the increase in clicks. Of course, this means CPCs have increased. Google wins twice—more volume but increased competition means higher CPCs.

Is this bad for advertisers? Not necessarily. Conversion rates tend to increase significantly during holiday sale periods, so even with higher CPCs your overall return on ad spend may be higher. This will certainly vary from program to program, so keep an eye on your overall campaign efficiency (or use a tool like Marin to help do it automatically).

Is the Holiday Season Getting Longer?

Another trend we were curious about is whether spend is ramping up earlier than it has in previous years, diminishing the importance of Black Friday and Cyber Monday in favor of a longer holiday season. Based on our set of advertisers, the answer to this is no. In the chart below, you can see that the 2017 spend pattern closely follows the 2015 and 2016 cycles, with no signs of an earlier ramp.

As the shopping season gets more frenzied and more shoppers hit the stores and their devices, we’ll no doubt see other interesting data and trends. Stay tuned for updates during the rest of the holiday season.