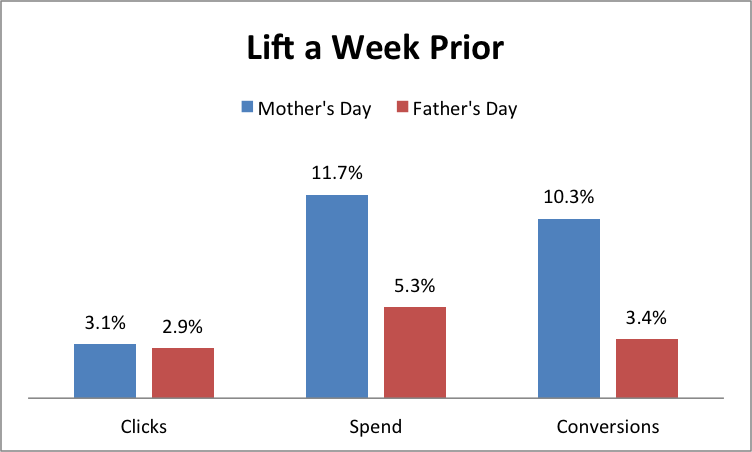 As Father’s Day approaches, dads everywhere are eagerly anticipating a day for themselves (bring on the socks, watches, and gadgets). If advertising dollars were any indication in 2015, how much should they really be looking forward to it this year?

Last year, we looked at Mother’s Day versus Father’s Day advertising spend and clicks, and the latter simply couldn’t hold up to the former. For 2016, we investigated whether there was a chance that consumers and advertisers would show more love to Father’s Day.

How Did Spend Correspond to Clicks?

On the consumer side, we saw a 3% increase in clicks for both Mother’s and Father’s Day, during the week leading up to each day. This could be due to increased consumer awareness for Father’s Day leading to a similar bump when compared to Mother’s Day. It also appears that the number of Father’s Day sales has increased compared to 2014, based on campaigns within the Marin Index.

What does this mean? While consumers paid similar online retail attention to both holidays, advertisers viewed Mother’s Day as more competitive and important. This may be explained by looking at the number of conversions for both holidays. Mother’s Day had a 10% increase in conversions versus 3% on Father’s Day.

While dads didn’t quite overtake moms last year, it was much closer than the year before. If the trend continues this year, it’s a good sign for dads. We’ll see this Sunday.

Perhaps this year, advertisers will devote more of their attention to Father’s Day, which is what we recommend—giving equal consideration and budget to Father’s Day, as it may shape up to be just as important as Mother’s Day in terms of sales and bringing in consumers. The two appear to be converging with each new year, and it makes sense for advertisers to adjust their spends and sales campaigns to compensate.

Analytics
Retail
Trends
Subscribe
Sign Up and Get Updates by Email
Thank you! Your submission has been received!
Oops! Something went wrong while submitting the form.
Featured Posts