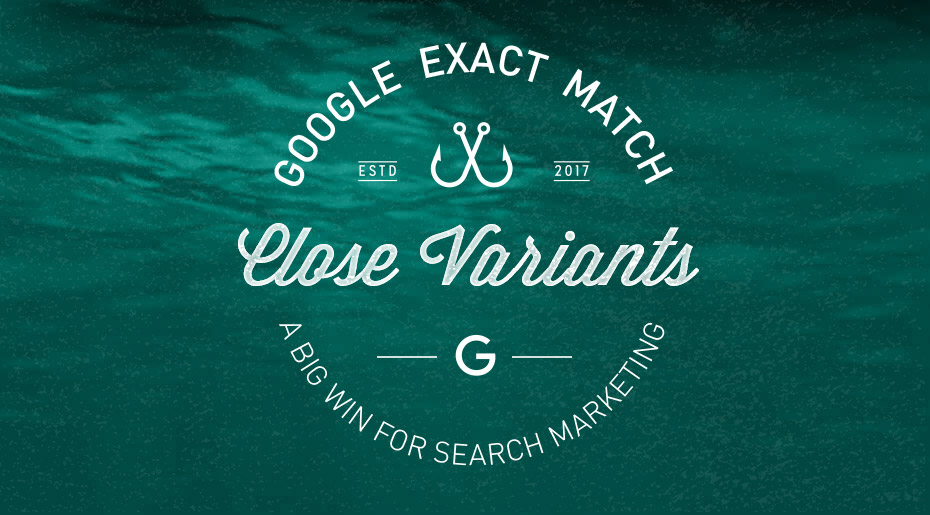 Search marketing is not unlike fishing. If keywords are the bait, then match types are the technique.

Google, then, is the world’s largest ocean. Millions of marketers trust it to provide lots of customers, at cost low enough to turn a profit. So, any change to this ecosystem is heavily scrutinized, and sometimes criticized, when marketers perceive the change as a
net-loss.

Let’s review the change Google made to exact match keywords last week. The goal of our analysis will be to determine if this is a net-positive (or, net-negative) change.

In 2014, Google introduced ‘close variants’ to exact match. This allowed Google to serve ads to plurals of exact match keywords. This was a major change in its own right because exact had historically meant “exact.”

As of last week, the scope of ‘close variants’ expanded, a lot. Function words —in, for, to, the— are ignored and the order of the words is no longer a factor. For example:

As you may recall, Sundar Pichai described Google as an AI-first company in last year’s Founder’s Letter. This update is an example of Google applying its new skills to a commercial application.

If you’d like to read about the nuances of this change we recommend you start with AdWords’ blog.

The net-net is that your exact match keywords will serve against more queries than before.

In 2013, Netflix ignited customer furor when it announced the forthcoming removal of 1,800 unpopular titles to make room for 500 new popular titles. The perceived loss felt unfair even though most people would never watch, or have even noticed, those 1,800 titles.

This is a human quirk that Nobel Laureate, Professor Daniel Kahneman, developed into a behavioral economics theory called “loss aversion.” The loss of something (say $5) is more painful than an equal gain (like winning $5). In fact, it can be more painful than even a two ($10) or three-fold gain ($15).

I share this story and corresponding economic theory because Google’s change to ‘exact match’ keywords has, in some instances, provoked ire in the marketing community. The perceived loss in this instance is “control” over when and where exact match keywords will serve.

We’d argue that, from a purely mathematical perspective, this change has more upside than downside—not unlike the 500 popular videos replacing 1,800 unpopular ones.

Here’s why we’d make that argument.

Today, Google fields queries from a variety of devices. Due to emerging technologies, consumer behavior is rapidly changing. We no longer live in the static backdrop environment, which was the norm just a few years ago, where 100% of Google’s search queries came from one source: desktop computers.

Out of the three billion queries Google fields every day, around
16-20% are brand new. That’s the opportunity for the enterprising marketer—discovering profitable greenfield queries. And, Google’s change is designed to help you find these new, profitable queries—and, in turn, netting new customers.

Tools of the Trade

To my surprise, Wikipedia lists over two dozen types of fishing techniques. Who knew there are so many ways to catch a fish!

In the online marketing domain, “keywords” have emerged as the best targeting criterion, ever.

The match type applied to each keyword dictates the strategy, much like different fishing techniques are employed depending on the type or quantity of fish you want to catch.

Even with this expansion of ‘close variants,’ exact match remains a spear fishing activity. There’s just going to be more fish for you to choose from, so it’ll be important to be discerning where you expend energy.

It’s been said that evolution favors those who adapt the fastest. As marketers, we’re no exception to the rule. Beyond the obvious habits (or, automation) you’ll want to implement to search query mining, we also recommend that you evaluate the effectiveness of each of your fishing methods. You just might find that your new spear fishing method is more productive than you expected.

Optimization
Google
Keywords
Subscribe
Sign Up and Get Updates by Email
Thank you! Your submission has been received!
Oops! Something went wrong while submitting the form.
Featured Posts