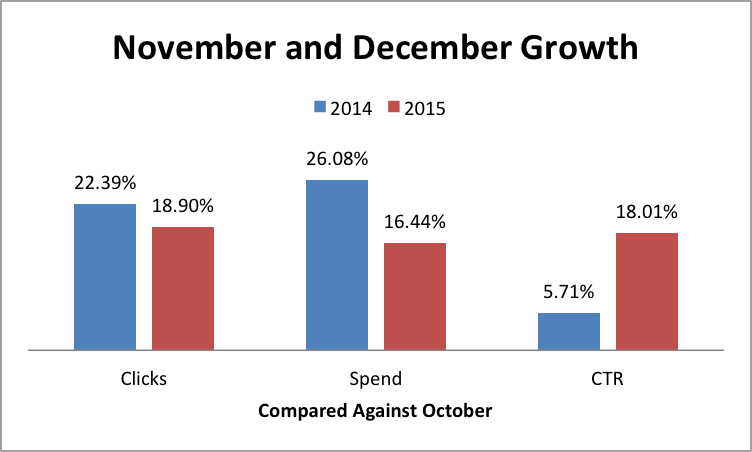 How Did Retailers Fare During the Crazy Holiday <br>Search Ad Season?

December has always been a frenzy of retailer activity, and the biggest month of the year for most, if not all, of them. Many retailers rely on a strong end of the year to buoy profits and plan accordingly for the new year.

We took a look at retail search advertiser behavior last month to see how the dust settled.

Compared to November and December 2014, this year’s holiday season actually saw less search growth. Ad spend in 2014 grew 27% in December when compared to October, while it only grew 16% in 2015.

However, clicks grew comparably, at 22% vs 19%, respectively, and ad efficiency also went up year-over-year. While CTR was only 6% higher in 2014, it was 18% higher in 2015, largely due to the growing adoption of PLAs and mobile.

December 2015, in particular, saw large, predictable spikes during the month that coincided with holiday sales. In the week leading up to the 25th, clicks and spend spiked over 250%, peaking during Christmas day itself when compared to the December average. This is very similar to 2014 behavior, and again, there were higher CTRs, largely through mobile and PLA growth in proportion to text ads.

Analytics
Retail
Mobile
Product Listing Ads
Subscribe
Sign Up and Get Updates by Email
Thank you! Your submission has been received!
Oops! Something went wrong while submitting the form.
Featured Posts