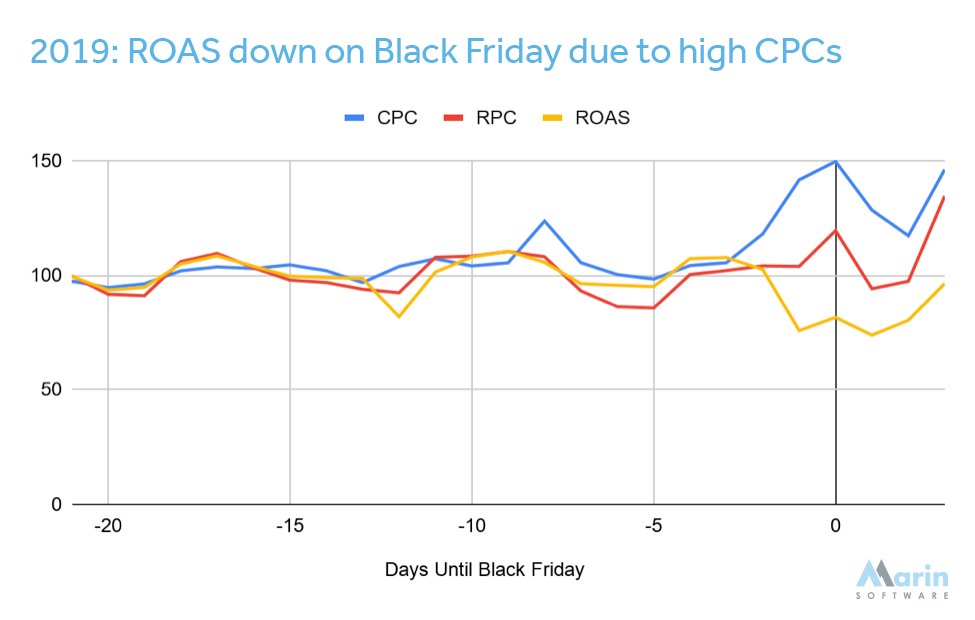 Key Differences Between This and Last Year's "Cyber Five"

We all know by now that Black Friday and Cyber Monday (BFCM) smashed records once again as digital commerce continues to grow domestically and across the globe. What we found by looking at Marin customer data echoes this growth, but also highlights some key differences from this year compared to last during the five days between Thanksgiving and Cyber Monday—now known in the industry as the "Cyber Five."

For one, Cyber Monday was in December this year, which may have influenced BFCM advertising budgets—spanning two months as opposed to a typical BFCM that has both dates in November.

eCommerce data, led by Amazon Advertising, was indexed across Marin’s customer base for 2019 and 2018. Our methodology takes the mean of the first week of November and uses that as the baseline (100). Data for each day shows whether that day was higher (100+) or lower (100-) versus the baseline.

On Black Friday, conversion rate and revenues per click were up, but not by as much as the costs per click. As a result, Return on Ad Spend (ROAS) was down. This implies high competition around peak seasonality. It stresses the need to place bets wisely and plan ahead so that you’re well-positioned to withstand the bid wars.

The ad spend climb this year was more modest and sustained compared to last year, which saw sharp increases. Again, this was likely due to the higher number of days leading up to Black Friday this year, with the day falling on the 29th.

It’s noteworthy that in 2018, the four days in the lead-up to Black Friday had 2x the mean spend, whereas in 2019 only one day, the immediate day prior to Black Friday (Thanksgiving) saw a 2x increase before Black Friday.

As the graph below shows, advertising CPCs rose sharply in the three days leading up to Black Friday. Black Friday CPCs were slightly higher than on Cyber Monday. Though the increase (1.5x the baseline) is consistent with 2018, this year it took advertisers only a couple of days to get there, versus last year’s steady, two-week ramp-up.

A boon for Google Shopping

Google Shopping CPCs were up 17% YoY through the “Cyber Five” period, perhaps due to new additional placements on YouTube that may have driven CPCs higher.

We’ll continue to monitor the year’s ad trends through the holidays—it looks like with growth across Amazon, Google, and others during the 2019 season as a whole will set records.

Google
Retail
Trends
Subscribe
Sign Up and Get Updates by Email
Thank you! Your submission has been received!
Oops! Something went wrong while submitting the form.
Featured Posts