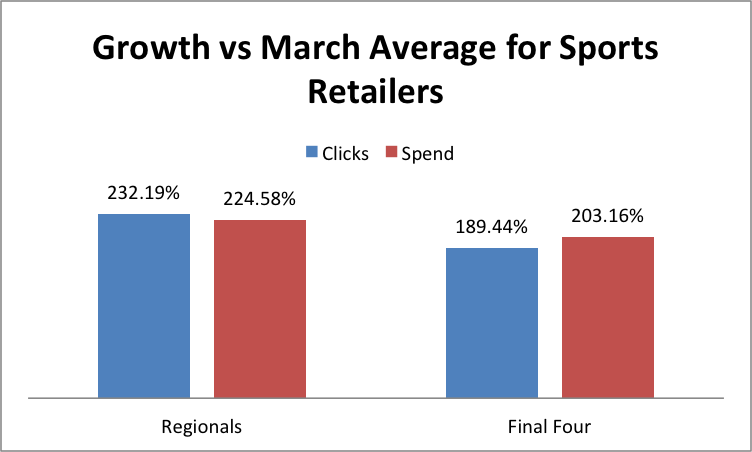 Every year, March Madness fever consumes millions of sports fans across America. Productivity plummets across workplaces, as employees catch a few minutes of the game on their computer or phone. In fact, it’s estimated that companies lose millions, if not billions, annually during the March Madness productivity dip.

For sports retailers, is there another story? How much does March Madness increase their sales, and can it offset losses in work output during this basketball-crazed month? To find out, we took a look at the retail vertical during 2015 and associated consumer behavior.

During March 2015, the retail industry saw a noticeable rise in clicks and advertising spend starting just before the 22nd – last year’s start of the regionals – through the end of the month and the finals.

During the regionals, there was a steady climb in clicks and spend, culminating and peaking near the end of March when the Final Four were decided. Click-through rates also almost doubled between the beginning of the month and the Final Four decision, showing that there was a strong correlation between US sports retailer and consumer activity, and when the games were decided.

In other words, the first small bump happened when the tournament began, and then rose and peaked close to the final four teams being decided, when consumers looked to buy products supporting their team of choice.

While these gains probably didn’t offset the productivity losses across employers nationwide, it’s clear that US sports retailers had a field day for interest in NCAA attire and merchandise.

Analytics
Audience Data
Retail
Subscribe
Sign Up and Get Updates by Email
Thank you! Your submission has been received!
Oops! Something went wrong while submitting the form.