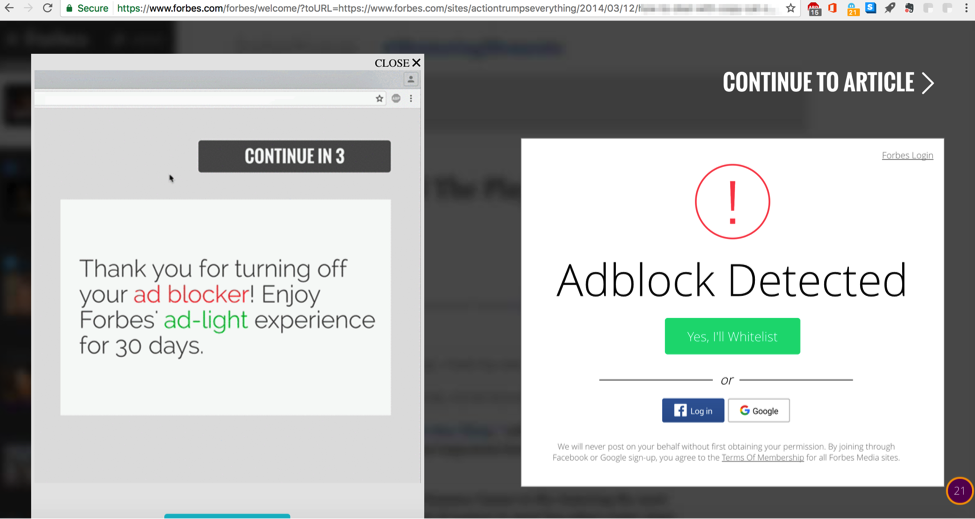 Will Google’s Ad Blocker Save the Free Internet?

Every morning I read the WSJ (print edition!) and enjoy a cup of coffee. It’s typically a low-key affair.

But today was no ordinary day.

I was taken aback when I read this headline: “Google Plans Ad-Blocking Feature in Popular Chrome Browser.”

“What the heck?!” was my split-second reaction, followed by, “This is madness!! What are they thinking?? How will they make any money if they block all the ads??”

It was early. The coffee hadn’t fully kicked in yet.

If you’re familiar with Daniel Kahneman’s famous book—Thinking, Fast and Slow—this is a great example where thinking slow is a good idea.

After some reflection, some more reading, and another cup of coffee, I decided this move could be brilliant. Heck, it might just save the free web!

Advertisers spend money to capture our attention and attempt to persuade us to take some sort of action. But, no single advertiser can “own” our collective attention—that’s the commons in this story. Instead, they all compete for a small slice of it.

This has created an arms race that helps explain why ads are getting brighter, noisier, and more pervasive. In fact, they’ve become so bad that many people have installed ad blockers to try and weed them out.

You may have noticed, I put free in quotes. That’s because Eyeo earns around $160M per year from AdBlocker+.

You may also be wondering, how do they pull off that magic trick?

Well, they hold their users as ransom. Big companies—like Google—can pay to be ‘white listed’ and have their ads shown despite AdBlocker+ being installed.

Here are my hunches to explain why Google wants consumers to use their ad blocker instead of AdBlocker+:

Hunch #1: Google wants to send a message to future entrepreneurs that ad blocking will not remain lucrative, perhaps to folks like this: Princeton’s Ad-Blocking Superweapon May Put an End to the Ad-Blocking Arms Race.

Hunch #2: Google would become both judge and jury. They alone would decide which ads are “good” and which are “bad.” For publishers, this may create an incentive to stick with Google’s ad network and not branch out.

Hunch #3: By being able to set and enforce advertising rules, Google could stomp out bad actors running ads through non-Google networks. This sort of unified regulation of marketers could help keep the Internet open, free, and unregulated. And that’s something we should all celebrate.

Hunch #4: Google has a need for speed. Particularly on mobile, where seconds and milliseconds matter. Bad actors run ads that chew up bandwidth and slow down website and app performance. By removing these, Google will speed up everyone’s online experience.

We all benefit from a free and open Internet. I'm encouraged by the changes taking place to make sure it remains free and open for the long-term. At the same time, I’m cautious about the consolidation of power. This is a topic we all have a vested interest in keeping an eye on. I’ll continue doing my part, reading the morning newspaper headlines over a hot cup of coffee.

Google
Subscribe
Sign Up and Get Updates by Email
Thank you! Your submission has been received!
Oops! Something went wrong while submitting the form.
Featured Posts