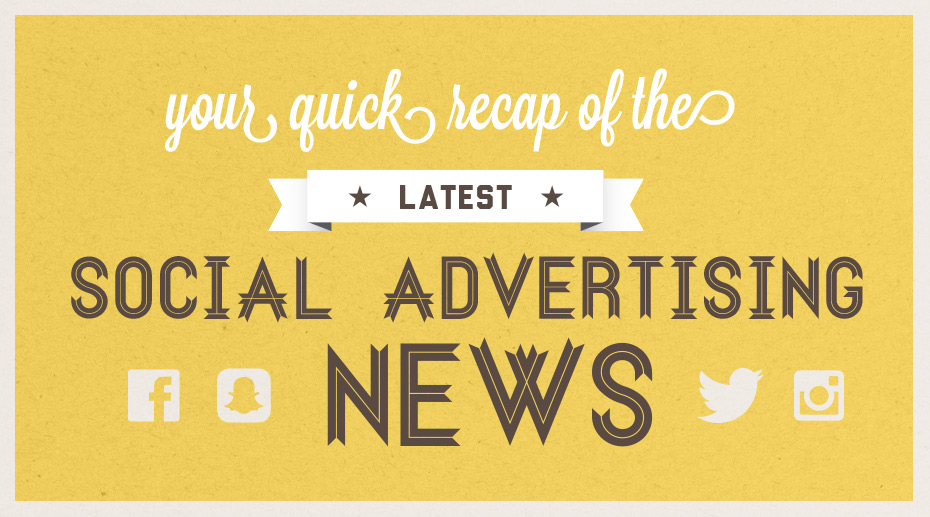 Your Quick Recap of the Latest Social <br>Advertising News

The world of social advertising changes every day, and it can be a lot to keep up with! There are new ad types, forming partnerships, emerging tech, financial announcements, and the list goes on.

If you’re feeling a little behind on the latest, need-to-know news, grab a cup of coffee and take five minutes to catch up with this
quick recap.

Quick recap: Twitter announced a new algorithmically sorted way to view the timeline, although it’s not yet turned on by default. Consider it the “while you were away” feature on steroids.

What it means for advertisers: Advertisers have come to expect lower Facebook engagement on organic content, so the same fears may come into play here. Twitter representatives have said that ads will appear in the newly sorted timeline, but that the best content will rise to the top regardless of whether or not it’s paid. Expect Twitter to continue evolving in its quest to revive shareholder value.

Quick recap: Instagram rolled out support for 60-second video ads, a big change from the previous limit of 30 seconds. T-Mobile (did you catch the Drake commercial?) and Warner Bros. were among the first brands to test the extended video ad type.

What it means for advertisers: Instagram video ads can now be anywhere from three to 60 seconds, giving advertisers lots of room to creatively tell a story. Support is already available on Marin Social for advertisers who want to get started right away.

Quick recap: It was a great quarter for Facebook! The network beat estimates, announced $5.8 billion in revenue, and revealed it now has more than 1.59 billion monthly active users.

What it means for advertisers: The earnings call results are worth a read. To align with Facebook, advertisers should place extra focus on their mobile, video, and Instagram strategies.

4. Snapchat Teams Up with Viacom

Quick recap: Viacom and Snapchat announced a major partnership deal, which will give Viacom exclusive rights to sell Snapchat advertising.

What it means for advertisers: Viacom’s core investment in broadcasting and cable, combined with this new focus on social, hints at just how important cross-channel advertising is becoming. If Snapchat’s not your cup of tea, consider other tactics such as triggering social ads based on TV commercials, or running similar video content across Facebook, Instagram, Twitter, and TV.


Quick recap: Free Basics by Facebook is a free, zero-rated platform that provides access to basic Internet services (news, health, education, sports, etc.) in developing parts of the world. Net neutrality concerns have made it controversial, and India recently passed legislation that caused Facebook to shutter Free Basics in the country.

What it means for advertisers: Free Basics will still exist in over 30 other countries, and Facebook plans to continue efforts to connect people in India. There are no ads in the Free Basics version of Facebook. However, international advertisers should consider taking advantage of new Facebook ad types (like Slideshow Ads) to reach users with slow connections in high-growth areas.

What it means for advertisers: Once the feature is rolled out, advertisers will no longer need to embed captions or upload their own caption files. Facebook’s internal tests show that video ads with captions increase video view times by about 12%!

Quick recap: Twitter announced a new ad product called First View. It will allow advertisers to do a 24-hour takeover of the top ad slot in the timeline with a Promoted Video ad.

What it means for advertisers: Brand advertisers, rejoice! First View will offer a high-impact way to drive awareness at scale and gain maximum exposure for your brand.

Quick recap: Instagram users will now be able to quickly switch between multiple accounts, without having to log out.

What it means for advertisers: This is an exciting change for social media managers who run multiple Instagram accounts. However, larger advertisers who use a tool to manage their accounts won’t see much of an impact.